Food provides us with essential nutrients, proteins, vitamins, and minerals that help us stay active, grow, and live life to the fullest. A well-balanced diet is crucial for our overall health.  However, malnutrition facts reveal that in many countries, nutritious and healthy food is too expensive. It’s often inconvenient, unsafe, and unavailable, which leads to the problem of malnutrition.

Malnutrition is a global problem caused by dysfunctional food systems. Unfortunately, it’s also the leading cause of disease and death in the world. Moreover, the levels of malnourishment are sky-rocketing, affecting millions of people on a global scale and creating a world health crisis. It’s time to raise awareness on this matter and support the fight against malnutrition.

The Top 10 Malnutrition Statistics and Facts

If you want to learn more about the causes, types, and consequences of malnutrition and undernutrition, keep reading.

1. Malnutrition occurs when an individual consumes too much or too little of essential nutrients.

Contrary to popular belief, malnutrition refers to a person’s quality of diet, not its quantity. Not giving your body enough nutrients (or the right balance of nutrients) causes malnutrition, and this can lead to severe health issues.

2. Low income is just one of the numerous causes of this health issue.

Malnutrition and poverty are closely related since a great number of people can’t afford healthy food. Some other malnutrition causes include poor dietary choices such as consuming fast food, difficulties in obtaining food, and numerous health and mental health conditions.

3. The term malnutrition refers to 3 groups of health conditions.

All these types of malnutrition are equally dangerous.

4. Every country in the world is affected by some form of malnutrition.

Not a single country in the world is spared from this health crisis, and fighting it is a big challenge. People who are at the highest risk of being affected by malnutrition are women, infants, children, adolescents, and the elderly, but other demographics can be affected by it, too. Poverty also greatly amplifies the risks associated with malnutrition.

5. The signs of malnutrition depend on its type.

6. There are numerous symptoms of malnutrition.

One of the earliest symptoms of malnutrition is a lack of appetite. Other symptoms malnourished people exhibit include delayed wound healing, feeling cold, tired, and irritable. Additionally, the symptoms include getting sick more often and taking longer to heal, as well as a higher incidence of complications after surgery.

Those who are malnourished may also have difficulty breathing and may even experience heart failure. Symptoms in malnourished children usually include a lack of growth and loss of weight, as well as learning difficulties due to slow behavioral and intellectual development.

Consuming nutritious foods is essential for everyone, but especially for children. Adequate nutrition ensures a strong immune system, healthy growth and organ formation and function, and neurological and cognitive development.

7. Undernutrition begins in the womb.

The first 1,000 days — from conception to the child’s second birthday — are the most important for their development, and nutrition plays a crucial role here, assuring long-term benefits for the child’s well-being.

8. Globally, close to 200 million children under 5 suffer from stunting or wasting.

The malnutrition statistics also reveal that an additional 40 million children under five are overweight, and their number keeps rising rapidly, even in low-income countries.

Moreover, 3.1 million children under the age of five die every year because of malnutrition and hunger. That’s almost half of all deaths of children younger than five.

10. Poor care of women and children is an underlying cause of child malnutrition.

Out of this number, 23 million are in Africa. Studies have shown that without food and nutrition, children have difficulties learning, which affects their future.

12. One in 4 children in the developing world is underweight.

13. One in 3 children in South Asia and sub-Saharan Africa are stunted.

Stunted children are the ones who haven’t developed physically and mentally, due to undernutrition, and they’re usually shorter than their peers. Also known as chronic malnutrition, stunting affects 149 million children globally, with 34.4% of them living in South Asia.

14. About 340 million children suffer from hidden hunger due to micronutrient deficiencies.

It’s estimated that at least one in two children under the age of five suffers from hidden hunger, meaning they don’t get enough essential vitamins and minerals. It’s important to note that even a mild iodine deficiency can affect a child’s ability to learn.

The term describes children who are too short or thin for their age due to malnutrition. If left untreated, wasting malnutrition can lead to severe acute malnutrition (SAM). Children with SAM are 12 times more likely to die than healthy children.

16. 1 in 7 children in Eastern Europe and Central Asia is overweight.

Overweight and obesity can cause serious health issues both in childhood and later in life. Just some of them include musculoskeletal, gastrointestinal, and orthopedic complications, as well as early onset of type 2 diabetes, and behavioral and emotional problems like depression and stigmatization.

17. 1.9 million adults are overweight or obese, while 462 million are underweight.

Malnutrition can affect anyone, regardless of their age, education, or social status. Besides affecting the health, malnutrition also increases healthcare costs, affects productivity, impacts economic growth, continuing the cycle of ill health and poverty.

The number of people affected by hunger has dropped significantly from 19% in 1990 to 10.8% in 2018, as the global malnutrition statistics reveal. However, the prevalence is still very high, and close to 9 million people annually die from hunger and hunger-related illnesses.

The prevalence of malnourished adults is high, as well — 37% of women and 35.5% of men are obese.

20. Haiti is the country with the highest rate of malnourishment in the world.

21. Adolescent obesity in the Philippines has tripled in the last 15 years.

22. Undernutrition is the main cause of 28% of all childhood deaths in Ethiopia.

When it comes to malnutrition in Ethiopia, statistics reveal that two out of five children suffer from stunting, and 81% of the reported cases of child malnutrition are left untreated.

23. Nutritional anemia is a very common consequence of malnutrition.

An imbalanced diet and a lack of nutrients often lead to low red blood cell count, causing low levels of hemoglobin in these cells. It’s a condition known as anemia, and it affects about 30% of the global population.

The prevalence of this malnutrition-caused illness varies from 73.9% in northern India to 7.1% in the US, meaning that it’s more common in the countries with low socioeconomic status, as revealed by the malnutrition statistics by country.

25. Beriberi is common in regions without access to vitamin-enriched foods.

Vitamin B deficiency is the main cause of this illness that affects the heart and circulatory system, as well as decreased muscle strength and muscle paralysis.

What causes malnutrition in the elderly?

What causes malnutrition in alcoholics?

Consuming great amounts of alcohol can interfere with the digestion and absorption of nutrients. Alcohol abuse can also result in poor eating habits and bad decisions regarding nutrition.

Climate change causes and worsens malnutrition in an abundance of ways. Let’s take droughts as an example. Climate change had caused severe droughts in southern Africa in 2015 and 2016, diminishing both the access to water and the quality of available water needed for drinking, cooking, agricultural production, livestock survival, affecting the lives and livelihoods of the most vulnerable people.

Malnutrition weight gain is not unusual. Eating too much food that is not nutritiously rich, like junk food and processed food, causes vitamin deficiency, which in turn leads to malnutrition.

This widespread problem affects mainly children in developing countries. It deteriorates the quality of their life and endangers their future. The malnutrition facts clearly show that it can be prevented and treated with regular exercise and a healthy, well-balanced diet, but the problem is that many people can’t afford this. This is why many humanitarian organizations, like UNICEF, try to raise awareness and help people in developing countries.

Mirjana is an experienced content writer with a master’s degree in English philology and literature. An avid reader, dark chocolate connoisseur, and coffee addict, she is passionate about writing quality content based on thorough research and facts. Health, animals, literature, and human relationships are just some of the topics she has covered so far.

16 Mind-Boosting Caffeine Statistics & Facts to Wake You Up 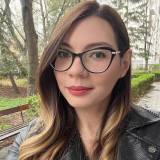